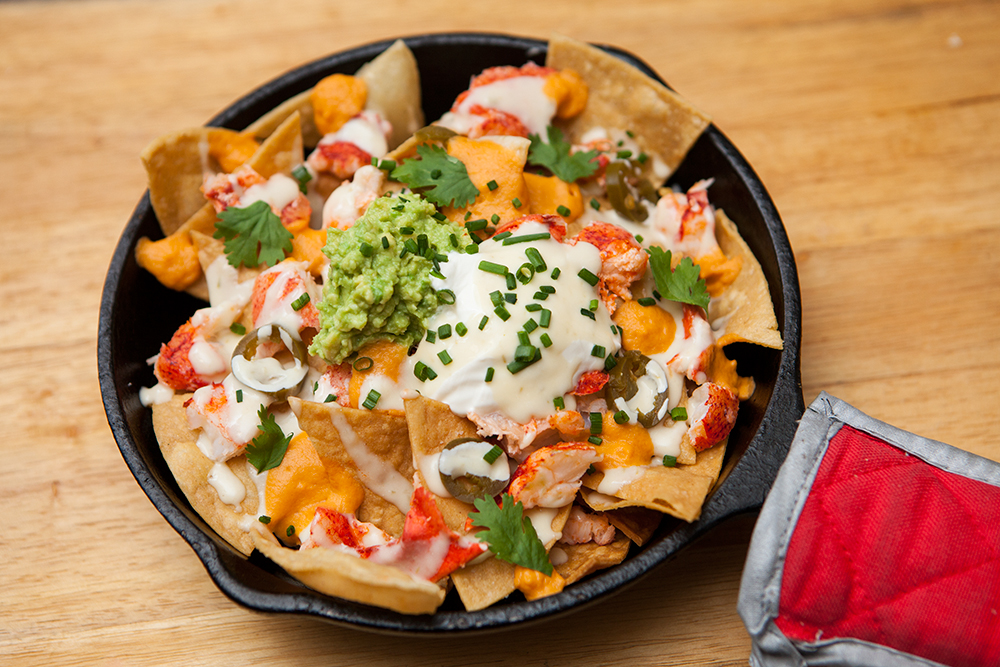 Over on Medium.com my friend David Hart has been holding the Nacho Bowl, a head-to-head tournament between NFL-inspired nacho recipes. A purist will point out that states like North Carolina and Washington don’t lay claim to a distinct nacho style, but ‘regional inspiration’ comes in many forms. David’s divisional playoff match pitted Frasier themed nachos (topped with smoked salmon and espresso cheddar) against some Carolina faux pulled pork nachos, resulting in a close victory for Seattle. Simply brilliant and hilarious.

This sort of pun-heavy, needlessly clever culinaria is right up my alley. David accepted my offer to represent my hometown New England Patriots for the AFC championship against the Colts, and I spent the next few days putting together a dish called Good Will Punting: How Do You Like Them Nachos? 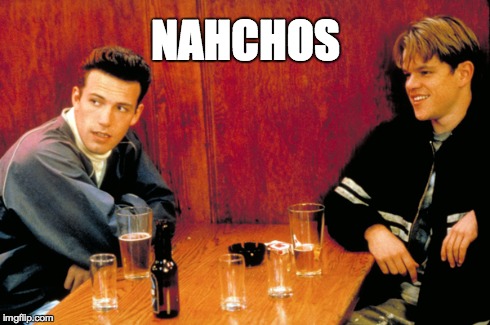 ‘Good Will Hunting’ has long maintained critical acclaim, but it is particularly beloved by Bostonians. There is something about Matt Damon’s character, Will, that appeals to working class underdogs who are literally misunderstood because of their coarse accent. He does manual labor, has frosted tips, and sleeps on a twin mattress in a room lit by a single light bulb. He has a simple life, mostly spent with 3 extremely loyal friends: one who spends half the movie with his head down, presumably because he’s drunk, another who masturbates into a baseball mitt, and a third who is Ben Affleck. Will is special though- he’s a wicked smart janitor who solves allegedly difficult math riddles. Despite his academic prowess, he doesn’t own a pencil or paper. His soulmates are Shakespeare, Nietzsche, and Ben Affleck. He’s also really deep and sensitive; underneath that jumpsuit is a guy with severe commitment issues who rides the T when he’s sad. Will Hunting may be the first ever silver screen role model for Southie natives.

So… Nachos? I think it’s fair to say that they would be embraced in the taverns of Will Hunting’s world. They’re a bar food that you crave hardest when you’re 5 pints deep, nothing fancy about them at all. Much like Will, those chips start out brittle and resistant but slowly break down into a cheesy pile of mess. The challenge of the Nacho Bowl though, is to dress nachos with complex and thoughtful ingredients without stripping them of their approachability, all the meanwhile imbuing them with a je ne sais quois New England spirit. In a nutshell, we’re putting on a three-piece suit but still wearing crew socks. Let’s get something straight right off the bat- Nachos have to have CHEESE. Without cheese, nachos are just chips; they are literally defined by the presence of cheese. Equally as important though, is making sure that we represent New England on the plate and I’m not sure that’s possible without including a staple of the early pilgrim diet: LOBSTER.

Here we’re confronted with a classic culinary decree: don’t mix seafood and cheese. “Cheese overpowers the delicate nature of lobster” is the prevalent rule of thumb; a suggestion that I received from nearly everyone I sought advice from. Several friends earnestly suggested I forego the cheese sauce all together and substitute hollandaise or bernaise, common companions for seafood. Smart probably, but we’re not making a tortilla chips benedict. We’re making NACHOS, and the road to the Nacho Bowl is paved with cheese.

After consulting with Cultivation of a Cheesemonger, I settled on a sauce with swiss gruyere, butterkase, parmesan, and pickled jalapenos. The gruyere and butterkase were both fairly young, imparting a nutty creaminess and a largely butter forward flavor. Rather than a roux base, I opted to use melting salts (sodium citrate and SHMP), which keeps the cheese smoother and thinner at lower temperatures.

I can’t say the cheese sauce makes the lobster better, but it’s certainly delicious and doesn’t bulldoze over the lobster; in fact, they get along just fine. So let’s make a note to further explore lobster and cheese in the kitchen, and at the very least, stop blatantly hating on the idea of cooking them together. If you Michael Bolton clones have a problem with that, then we can just step outside and figure this out. 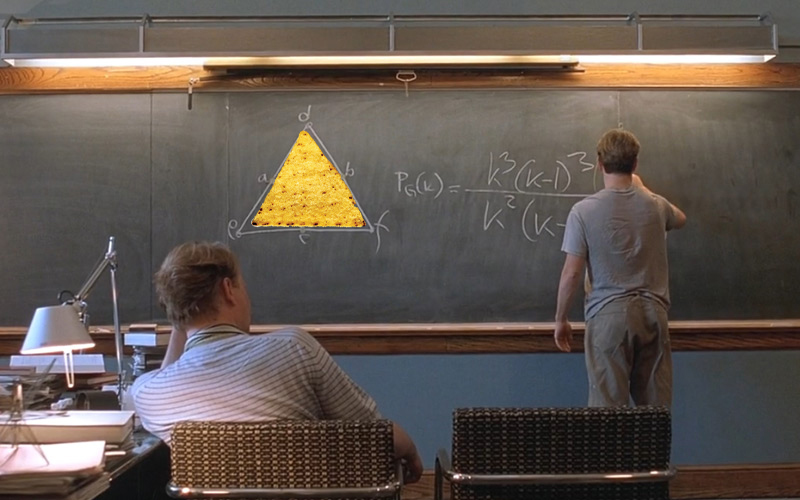 A fortunate byproduct of poaching a few lobsters in beurre monte is that you get a big bowl of vibrant red lobster flavored butter. The perfect thing to do with that of course is to make refried beans. I whipped Rancho Gordo gigante beans in an isi canister so that they would be light and airy. Technically, this is a ‘gigante bean espuma’, but we want these nachos to be more like the humble Sean Macguire and less like the Fields Medal Winner Gerald Lambeau aka mathematical dick, so we’ll just call them ‘whipped refried beans.’ An unfortunate byproduct of aerated refried beans though, is that it makes your wife fart in her sleep. It’ll wake the dog up!

I need to be serious for a moment here. If there’s anything to really take away from my nacho testing, it’s that chips are the most important factor for success. As I previously mentioned, it’s a foregone conclusion that they are going to eventually soften and moisten under the weight of the toppings, so you need to start with thick tortilla chips that will resist going limp for as long as possible. The best way to maximize crispiness is to make your chips at home by frying corn tortillas. There’s no store bought brand that comes even close.

I was going to go deeper into New England food pun territory (I briefly entertained the idea of making a duck tour-ine), but ultimately decided that all it needed to finish was guacamole, sour cream, jalapeno rings, and fresh herbs. My only regret is not doing a variation with tater tots instead of chips because in hindsight, Irish nachos is clearly the logical starting point for Good Will Hunting nachos.

It feels terribly shitty to spend almost 30$ on ingredients for nachos, but there’s no way around it; lobster’s not cheap here in Brooklyn.  When I was finally done, it seemed more appropriate to slowly savor the chips of my labor than to sloppily dig in, after all, it took several hours to make them. Who am I kidding though? They’re still just nachos. I grabbed them by the throat and fucking ended them. Got that chief?